One of Andy's Cub Scout buddies, Jimi did a presentation for his Disabilities Awareness Belt Loop about a fundraiser he and his mom do to help kids with Special Needs. Jimi talked about his own special needs and his friends with disabilities. Andy decided that he was going to donate the money from the cans and bottles he was saving as part of his recycling achievement would go to Jam 4 Jimi's Friends. After 3 months of collecting cans and bottles from home, the park, the neighborhood and my office, he raised $25! (That is 500 cans and bottles!)

So, this year's Jam was this past Sunday. I took Andy and Ryan while Todd and Colin held down the fort. The boys had a blast in the kids' room. They sang "Ring of Fire" during karaoke, got their faces painted and had a terrific presentation by a couple of Firefighters including a couple of give-aways! 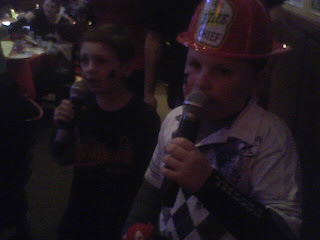 Did I mention there were some guests that came all the way from a Galaxy far- far away? 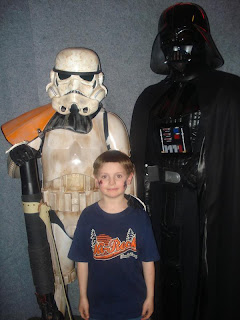 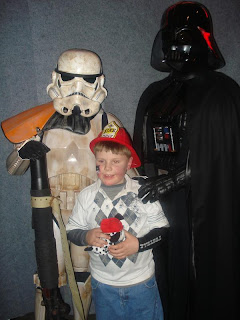 yes, Todd was jealous! Actually, these guys were from the 501st CTG Troopers.

We had a great time and Andy is starting his collection for next year. If you don't want to deal with returning your cans & bottles (and you live near me) drop me a note and Andy can take them off your hands. His goal for next year is $100 because 25x4 is 100. It is great logic, but none of the 3 months he collected were during softball season.
Posted by Cate at 19:37 No comments:

I combined the techniques of knit and crochet. I started with the Ribs & Lace Tank from IK. Then, I changed the lace to st st and began with a privisional cast on. I Bound the provisional stitches with single crochet and then added the bcrochet lace edge. 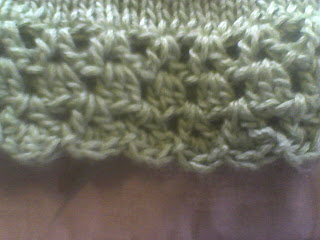 I worked the ribing mor or less as written. I did shorten the straps and raise the back. After grafting the straps, I added a crochet trim to the neckline. I then added a full crochet lace sleeve. This yarn has great drape, so it worked out nice. 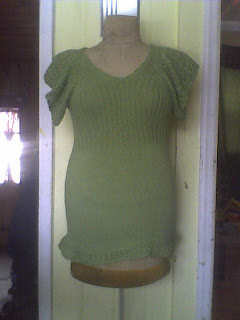 upon further inspection, I decided the neckline could use some beads for a subtle sparke. 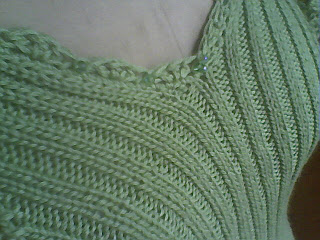 What is next? I have a few stealth deadline projects one down three to go. Two of which should go quickly. The third is OTN now and going pretty quickly. LOVE that chunky yarn ;)
Posted by Cate at 08:58 No comments: