The boys got a lot of really cool stuff from Santa (including the Wii!) but the #1 hit was from Gradma. I saw it in a magazine and decided the boys HAD to have it - only to find out she had already bought it. glad one of us did... because they LOVE it!

It is a tea set from http://www.greentoys.com/ serioulsy COOL toys! nice big teapot and good sized cups. It even has a creamer, sugar bowl and spoons! The best part? It is made right here in the US out out 100% recycled milk bottles collected curbside. It is also apporved by the FDA for food contact.

I need to be more specific

In my list of grattitudes, I included "long delicous kisses". well, I was met with a bag of Hershey Kisses shortly after I wrote that. not what I had in mind, but yummy none the less.
Posted by Cate at 17:19 No comments:

in case you were wondering... 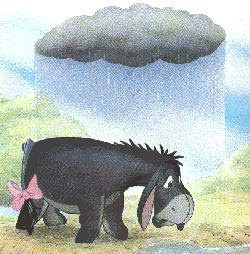 I had a roommate at RPI who collected Eeyore. She had one talking one who said "Goin' to a party.." when you pushed a button. I don't know if hers was defective, haunted or possessed, but it would randomly talk to me when he and I were alone in the room... creepy. It is a good thing I liked my roomie so much or Eeyore might have had an unfortunate accident in teh basement of the JEC... (that is where we CivE's kept all of our toys tools for breaking shit. Fun place!)

Anyway... I'm feeling a bit like Eeyore these days. I'm feeling like the Universe has taken a big crap on my life and my house. It is hard to remain optomisitic in the middle of a shit storm. Seems like the only thing that makes me smile these days are my kids - but they get me aggrivated too...

This is the part of this post that I was going to list all of the crap that has happened to us in the last month. I deleted it. Some of it is information that really isn't mine to publicize, but, mostly i don't want to focus any mor eenergy than I need to on it.

What really sucks is that I have little to no control over ANY of it. mostly, I just need to sit and wait it out. I hate that! I can't just do nothing! So, I've decided to crank up the TSO, put away the Halloween decorations (no- not joking) and get ready for Santa because he WILL be here before we know it! I hear Wii may be having a very nice Christmas....
Posted by Cate at 12:36 2 comments:

Ryan's B-day and PDK (aka KIP)

He's had a hard time adjusting to the ups and downs and insecurity of the last few weeks. Homecoming was off to a bumpy start. His birthday gift from mom and dad was never more needed than this week.

My kids have too much stuff. I did laundry yesterday - their dressers are bursting. They have SO many toys that they don't even know what they have or where it is. Bookshelves overflow into piles on the floor. They have bins of craft supplies that don't even close. With Christmas right around the corner, the last thing we want to do is fill our house up with MORE crap that will take up space and be unappreciated. what to do?

Ryan is a hockey fan (and a hockey player!) so we took him to a Sound Tigers (Islanders) game. it happened that the closest game to his b-day was Friday night against the Wolfpack (Rangers) - always a good game. Even better? the Kids' Club (which he is a member) had an open skate before the game! He got to skate on the ice at the Arena. How cool was that? it was his first time on skates this season and he fell a lot, but he just kept getting right back up! even the security guard was impressed! Mommy was proud!

(I insisted on the helmet - the pads were his idea!)

During the game, he had a great time wearing his new jersey, eating his "fluffies" and watching the game. He really got into it!

At one point the camera man came up into our section in the stands (110 - bar stool section) and put him up on the big screen! he loved hamming it up! Then, he panned up from Ryan to the ice and caught this shot