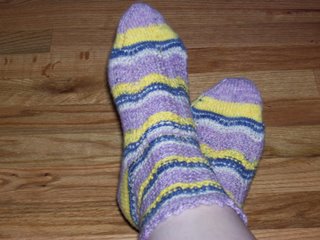 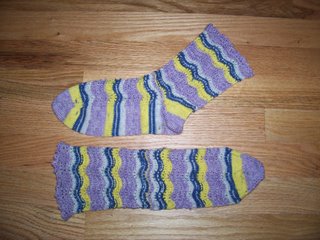 So I finally phinished my phish socks. didn't take too long once I picked it up again. I did the "tail" in pattern in GS and I bound off with a SC picot. I'm really happy about how they came out! I really like working toe-up.. perfect fit! I'm making a premie hat/socks set to donate with the leftover yarn. I've also been chugging away at Cargo but that St St gets old fast... and it isnt' very exciting to watch.. I'll post pics when I've got more progress.

I also got a bit of sewing done too. I finished my nursing PJs. I did a lettuce leaf edge on the hem of the top and shorts and I did a decorative stitching on the bodice. I was SO excited to find the wooly nylon! they only had it in 1 color and it was the one I happened to need! I made a "snakeskin" HH for Ryan too. He wore it last night - as soon as I finished it! and I washed them all today. Guess which one he HAD to wear tonight???? I also sewed the velcro for a bunch more diapers - the last 3 smalls and 5 of the next size up. Now I just need to wait for my Procare and buttonhole elastic to come in and assemble them. I'm going to try using the buttonhole elastic in the leg so that I can cinch them up getting longer wear out of them. I may use it in the back too..

As for me & the squirt.. he still has no name.. we need to put the carseat in... I only want to sit on my ball...and I bought my new pump today (the old one was more than a little "tired" and the new one has the 2-phase let-down cycle so it will be more efficient).
Posted by Cate at 22:29 2 comments:

Elves will fix your lawn mower

I've been too busy, hot, tired and pregnant to keep up with the weeds. The mower broke weeks ago.. we thought it was just water in the gas..nope. changed the air filter..nope. then Todd gave up and tried to hack back the overgrown hedges. First, he cuts the cord, then he gets a near fatal case of poison ivy.... and there our yard sits... no more trailer or demolition debris in my driveway... but the jungle was swallowing up the kids pool and sandbox..

I was whining to mom about my redneck yard yesterday and I was telling her about Todd's frustrating attempts at yard work. I told her how he said "...and the lawnmower is still broken..." and then I told her "does he think elves are comming to fix the stupid thing?"

so, today Todd calls me at work to tell me that my dad just dropped off the lawnmower. I didn't know he took it.. neither did Todd. hmmm I told my Mom that I was just whining and that I wasn't asking dad to fix it. she had no idea what I was talking about..... gotta love my dad!

I also had a MW appt tonight! I'm down to every week now! I have the GBS test next week.. not bringing the boys to that one! and I scheduled the rest of my appts! oh- he's head down and she won't try to stop my labor at this point! and appearantly having BH contrax every time I move is a "third baby thing."
Posted by Cate at 23:23 No comments: 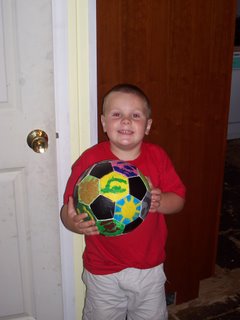 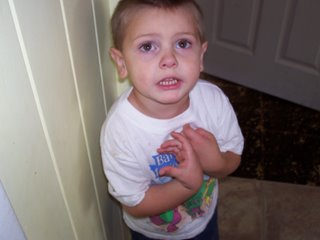 somebody hand me the keys to the minivan b/c I'm officially a soccer mom!!! we signed Andy up last week, but it wont start until school starts. He's SO excited!

Hmmm.. what else... I've started knitting on Cargo in a green "Galway Highland Heather" which is actually made in Peru! go figure.... I LOVE the hem technique she uses in this pattern! I'm enjoying the yarn so much that I may go get more and make a matching sweater.

I've also sewn a few diapers. I made the snakeskin ones and a couple more fitteds out of some old flannels and t-shirts. I'll take some pics when they are all done. oh- I also made a hat for Andy out of the Pumpkin colored LB wool-ease T&Q that I bought last fall.. better late than never! He really doesn't need a thick wool hat in the summer BUT he needed to feel like mommy loves him too (and I do!) I need to cut out the fabric for my shorts for my PJs tonight.

exciting life, huh? it's not easy to get a whole lot done when you're feeling like a wishbone...
Posted by Cate at 18:38 1 comment:

So I finished my suprise project! My prototype ribbed knit soaker shorts! It is SO hard to find nice boy things... even a lot of the soaker patterns are quite girly. Cute- but girly! my next project is going to be a pair of cargo pants or "longies" from Knitty.com! How cute are they???? 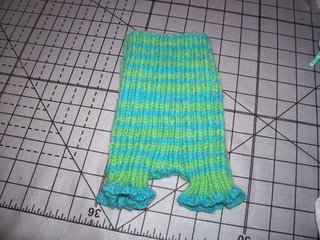 Mom has recouperated enought to get to her sewing machine! it still hurts for her to sit there for more than a few minutes at a time, but she managed to make some ADORABLE booties and hat with some fabric I had leftover after making the airplane diapers. I'm tempted to get more fabric for a shirt to match too! 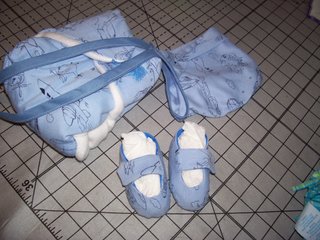 she also made this really sweet swaddling blanket. Don't you just LOVE that fleece???? 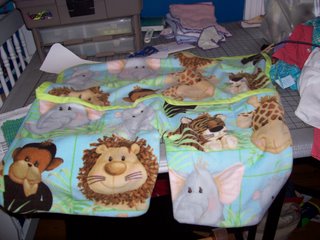 the squirt was squirming this morning and of course he settles right on my bladder. this sends me running for the restroom. I headed directlyfor my ususal stall (why are we such creatures of habbit??) and relieved the pressure! when I get up to flush, I notice a HUGE dead KOI floating there!!!! so for a brief moment I'm thinking.. did I just have a fish????

This was at 8 weeks to confirm that this baby actually made it all the way to the uterus and get a head count. one baby safe in the uterus! what a relief! 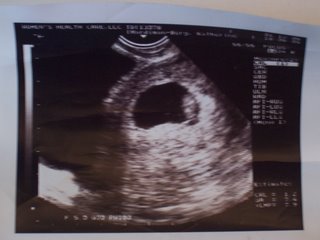 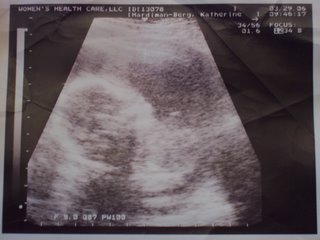 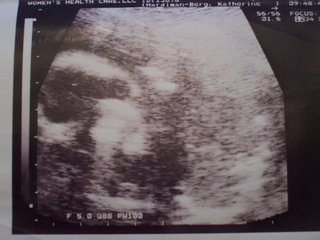 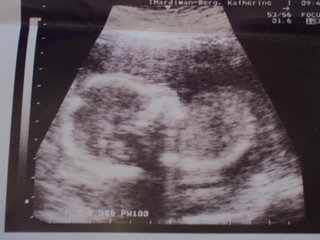 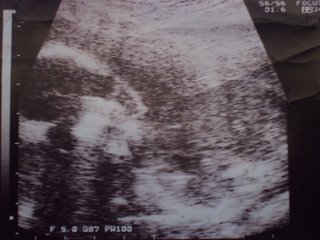 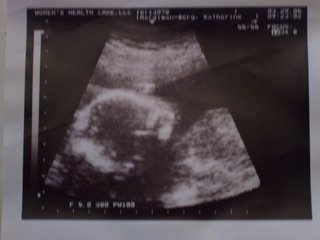 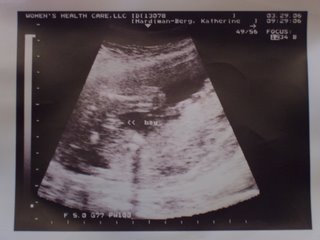 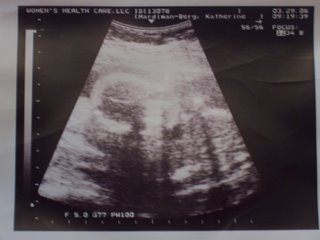 I've been Dye-ing to try this! 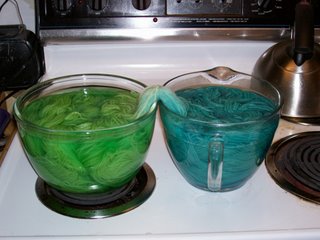 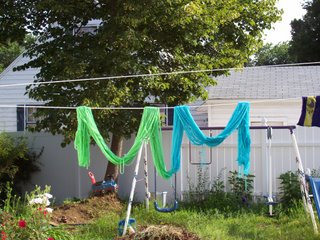 What will it be? wait and see! 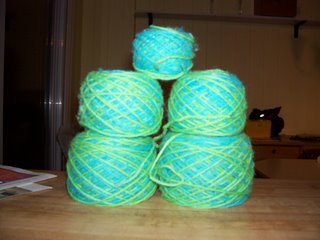