"Mommy's Purple socks!!" that is what Andy is yelling in my in my ear at the moment! yup, my first pair finished. I did the first one on 5 DPNs and the second on 2 circs. the second is clearly cleaner and more consistent in gauge. I'm not sure if it was the needles or the fact that I'm getting better a knitting, but there is a definate improvement! I'm on to Andy's Green socks (picture to follow.. I'm only on row 3!) trying 2 on the 2 circs 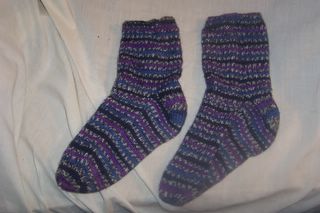 Another FO! I whipped up this scarf kit that my mom bought me in just one weekend! I worked it on size 19's instead of the 17's the pattern called for by accident, but fortunately I had enough yarn. it is SO soft and pretty! 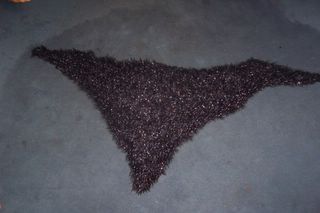 It is a nice change to get some good news. When Todd picked Andy up from School last week, both the teacher and her aide came running out to tell him that for the last 2 weeks, Andy had made HUGE improvements in school. He was actually talking and participating in class, refering to the other children by name and when he did have an "accident" he changed his clothes, by himself, without any argument. He even gave the teacher the "play-by-play" as he got dressed! he is now caught up with where he should have been in September. At this rate, he should be caught up to his class in time to start kindergarten with them! Todd and I did the math, and we figure the change coincides directly with Todd taking them to see the house when the roofers were working. We also went to the park by our house that weekend as well. Now that it is getting warm, well be spending LOTS more time at the park. I guess this just proves us and the psychologist right - he needs to go home to heal!

Even MORE good news: We had Andy's Parent/Teacher conference at Ripton last night. They've started re-testing him in ST (that's Speech Therapy). A normal/average score is between 85 and 115. When they did the placement testing in October, he scored 67. He didn't use verbs and had spoken very little since the fire. They gave one test last week and he scored 95! She started another test yesterday, but ran out of time. She said that if she scored it now, without finishing it, he'd have a 110!!! So, by this test he'll actually be ABOVE the averge level!!!she said that he still has areas where he is weak, but other areas where he is way ahead - pretty normal for Andy! We also let her know that he is starting to speak Spanish at home(thanks to DORA and Dad!)... which explains why she didn't understand some things that he's said. His overall evaluation was good as well. He is getting better at sitting still in circle time and paying attention, as well as following directions. I forget the term they have for it, but if you know Andy, you know his little "Andy Airplane fits" where he makes a fist, has his hands out and get real intense. Well, those are getting less intense (his hands are now by his side), less frequent, and shorter. It looks like he is getting past those too.

After that meeting I went to an LLL meeting. Todd had to rehearse for an audition, so I took both boys - and Kim :) to the meeting. I was very afraid of how they would act adn prepared to leave early, but they were SO good. they were quiet, they shared their toys, and they kept their hands to themselves.

I am SO proud of my boys! Especially Andy, he's doing SO much better and making so much progress! And of course, Ryan is always one step behind, so his speech/vocabulary skills are quickly getting better as well (as is his ankle)! I wish I could find a pre-k program that will take him this fall.
Posted by Cate at 10:56 No comments: