It has certainly been an interesting year. So much has happened and much more has changed. The kids have grown so much and started new grades. I guess the best way is to take it kid by kid. 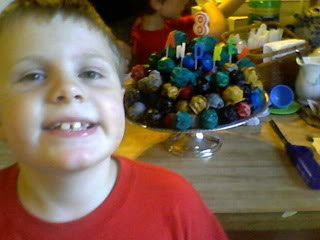 Andrew is now in 3rd grade. He's been dealing with a lot of social issues stemming from his developmental delays. He attended a social skills summer program and I think it may have done him a lot of good. He still has some problems, but he is doing his best to overcome them. We've switched his ADD meds adn I think that has a lot to do with it. He needs to do more of the work now and while it is difficult for him now, I think it is the best decision for him in the long run. He is now a purple belt in MMA and will be testing for blue in the next couple of months. He is also a Bear Cub Scout now and enjoying the new pack as well as racking up belt loops. In 2009, he celebrated his first communion - and is now disappointed that he has to wait until 4th grade to be an altar server. 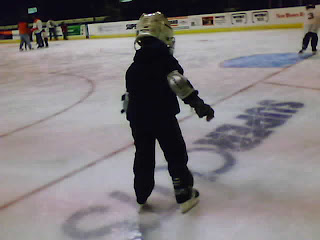 Ryan is still the charmer - but now it is in the 2nd grade. He still can't sit still very well - which was making for a difficult first grade year, but 2nd is going SO much better! he had his best report card yet and for the first time ever he is at or above grade level in reading. His math test scores have all been over 100% (hmm... wonder where he gets that from...). We are really thrilled at the improvement and growth. Now, if only he can learn some patience. He had a med change too and again it is a change for the better. He is also a purple belt in MMA and will be testing for blue at the first test of the new year. Ryan is also racking up the new belt loops in Cub Scouts ( he is "winning" 4-3 right now) where he is a Wolf Cub. He has recived his first reconciliation and is studying for his First Communion - on Andy's Birthday. 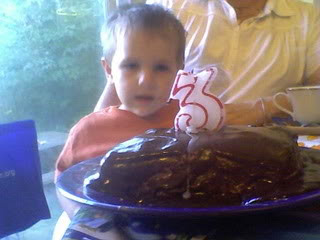 Colin began ST through early intervention. He has ADD red flags all over the place, but no official diagnosis. Hist first SLP "diagnosed" him with a case of my-brothers-won't-shut-up-long-enough-for-me-to-learn-to-talk. we've worked with him to help him learn to assert himself and it has made a huge differance. He turned 3 and transitioned to the Pre-K program. He goes 5 mornings a week and has made some new friends. We're working on the potty thing. He has decided that he is too big for diapers, but the accidents are still quite frequent. Hopefully 2010 will be a diaper free year!

They are all happy and heathy and that makes me a happy Mommy.
Todd's story really ins't mine to tell, but I can tell you that while 2008 was a year of difficult health issues for him, 2009 was a year of healing. He is in such a better a better place I can't begin to tell you. We have had our bumps and trails as a couple, but we renewed our vows for our 10th anniversary as a symbol of a new begining for us. 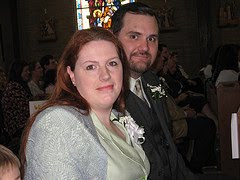 As for me, I spent most of 2009 looking for a new job. I found one. It is an honest living and even ion my field, but a big step back career-wise. I'm notthrilled with that, but the pay isn't too bad and the job security is very good and right now that is what really counts. I'll ride out the rough economy as a construction inspector for the DOT and then move on to what I want. I was presented with an opportunity to guest lecture at CCSU - which I really enjoyed. It has alos given me reason to look back on my career and take note of its twists and turns. I think I may have finally figured out the path I've taken and the reason for it - but that is for me right now. I'll share with the world when I am ready to continue my journey. I have learned the art of detachment and the power of grattitude both of which have brought me a lot of serenity in a stressful world. I have also learned that prayer is a conversation and I need to stop talking and listen if I want to hear the answers. I've also come to accept thatwhile those answers may not be what I want, they are what I need.
So, that is it for 2009. As we move on to a new year and a new decade I wish you all peace, prosperity and joy.
Posted by Cate at 12:00 No comments: 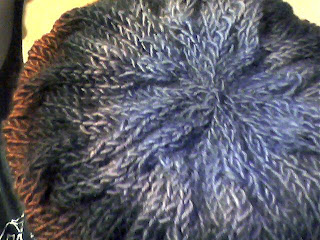 remember way back when I used to do weekly WIP update? Now that I can blog somewhat regularly, I'm going to attempt to resurrect that. I'm also putting out the challenge to other knit/crochet/quilt/craft bloggers to join me for WIP Wednesday. Drop me a comment and I will add your link to my post.
Before I explain the photo, let me tell you a little story. I usually ride the train to work. I knit on the trains - nothing new there. Well, now I'm working at 3 different stations. I have a backpack with my knitting, makeup and about 30 pens. I also carry my clipboard stuffed with forms in it. I left my bag on the platform in SoNo (which has recnetly been made "famous" by this story) while my clipboard and I went to talk to the cops. There was a RR employee standing about 5 feet from it. I guess he went to go get a coffee and some crackhead swiped my knitting! Did I mention that this was Christmas knitting? I made matching socks for all of my boys. I was halfway done with Andy's -the last pair - when it was taken LESS THAN A WEEK BEFORE CHRISTMAS!!! I ran back to Joann's got mre yarn and a new needle and managed to get a new pair done on Christmas Eve! AS frustrating as that was, I have to laugh because the joke was on the thief. There was nothing of any value to anyone but me in there. Good luck pawning a half knit pair of socks and some used lipgloss.
The hat is Star-Crossed Slouchy Beret from Strands of Me. The yarn is Debbie Mumm Traditions (Heather Haze) from Jo-Ann etc. It is a wool blend - soft and warm. It is a loosly spun single ply, so it can be a bit of a pita to work with. Each skein also had a knot in it which messed up the pattern repeat. The pattern was well written, easy to follow and fun to knit. I started it Saturday night and finished Sunday afternoon!
Right now I'm working on a pair of cabled gauntlets in the same yarn, but I have a feeling that they will end up being mittens. I'll post a picture of those next week. There isn't much to look at now.
I need to shovel out the sewing room and then I can post new pictures of my quilts. I am mid quilting on the feed sack sampler and I have another quilt top that needs batting, backing and quilting.
Posted by Cate at 06:31 No comments:

I've been doing a lot of reflecting these last few days. I suppose it is the new year coming. One thing I realized is that I've really tightened the circle of trust around me. In the past, I've let a lot of people in and trusted them. I thought that since they were my friends I could use their support. Instead of support, I got a lot of judgement. Some people just cut me out of their lives. Some decided to trash me behind my back. Others thought they knew what was best for me and told me - incessantly - what I should be doing then got upset when I didn't do it. None of those people know what it is like to be me. they don't know my boundaries or my limits. I have only truly learned what they are in the last 13 months. I've learned to trust myself.

There are some friends who have accepted me as me and support me in my efforts to grow as a person. I have made some new wonderful friends who do have an understanding of what I have been through as they are dealing with similar issues. They listen with love and understanding and offer support and advice based on their own experience. They respect my choice to take their advice or not as I see fit.

So, if you haven't heard from me much or you haven't seen me hanging out at my old haunts*, don't take it personally. I've tightened the circle of trust and I'm not in a place to loosen my grasp right now.

*except H&C - that has been a logistical problem which should be fixed in the near future. see you soon!
Posted by Cate at 12:03 No comments:

'Twas the Day After Christmas 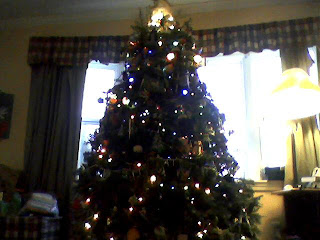 ... and all through the house
every creature is stirring
and making me NUTS!!!
seriously... that jolly fat ass brought you a ton of shit and you are going to fight over a vidoe game that you've had for almost a year? how about you jump on the wii fit+ and burn off some of that sugar.
Come to think of it, this jolly fat ass should kick them both off of the wii and do some yoga... since there isn't an s-factor for the wii (yet).
So, you can expect a return to regular blogging now that Santa brought the kids a new Laptop. We stopped our internet service shortly after the old one pooped out, so I am "borrowing" an unsecured signal until we reinstate it. I am currently researching our option since we also got rid of the land line. I hate the cable company with a passion words cannot express, so we won't be spending a penny there. I'm open to other suggestions. It looks like AT&T now offers internet with no home phone service, but that would also require us to switch cell phone carriers - which may not be a bad idea. Anyway, there are options to weigh and plans to compare, so bear with me.
For now I try for 2 weekly posts - an weekly recap and TGIF. The TGIFs are really for me, but I hope you are all inspired by them to do the same. It is really quite powerful when you get down to it.
Christmas recap:
lots of Wii games, the netpal and Cars for Colin. Todd got a GPS, some DVDs and we both got new tires for the car (amazing what happens when you grow up, huh?). I got a couple movies and lots of bling for my Pandora bracelet. most of all, a healthy hubby and 3 happy kids. 2009 has been a pretty good year to me, but that'll be another post.
Posted by Cate at 14:34 No comments: